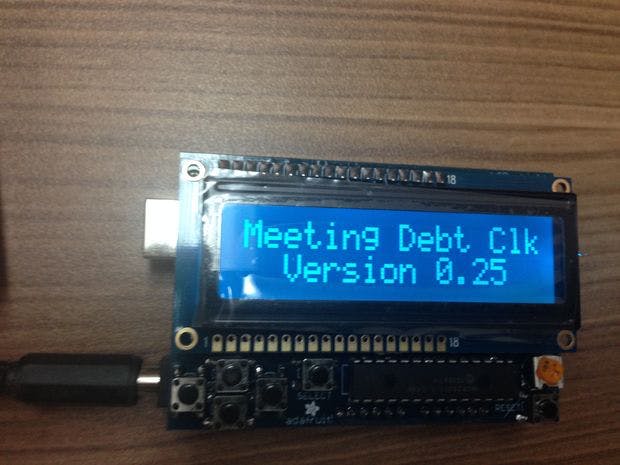 I had this idea to see what meetings really cost. It came to me when we were integrating a new timeclock system at work. Since the time clock has your hourly pay rate why not have one where you punch in at every meeting and a debt counter starts counting up at the rate your being paid for being there. As each attendee punches the Debt speeds up and shows the real dollars and cents cost of the meeting.

I happened to mention this one week over lunch and my friend Joe gave me the idea to make it less personal. Using a published salary rate for our job. I'll leave it to you to find your own average base salary for your clock.

We just got some LCD RGB Shields from Adafruit and they had to be assembled and tested so i so I grabbed one and an Arduino Uno and loaded the example sketch. After testing all the functions of the shield I wrote a simple loop. I only used three buttons. in, out, and clear. the clear button is just the Arduino reset button. I added another button to shift the background color of the display.

Just hit the Check in button for each person as they walk in the door. Then check them out as they leave. the display will show the running cost of the meeting, the current number of attendees and the total running time of this meeting.

I want to add an external display on the serial port using some big 7 segment displays I had.But that's after I completely redo the sketch. I want a setup menu and a better way of tallying up the cost.

The sketch is not pretty. I threw it together in less than a half hour. More of a proof of concept than a completed project. I want to use the timer to update the cost. Right now it's just a loop calibrated by trial and error. It works well for what it is.

If it goes over $1000 you lose the seconds display and if it runs for more than 24 hours it will say "you've got to be kidding me". I probably should have added a backlight red command to that last if statement..

15 projects • 21 followers
I Made the Internet of Things before people had a name for it.
ContactContact