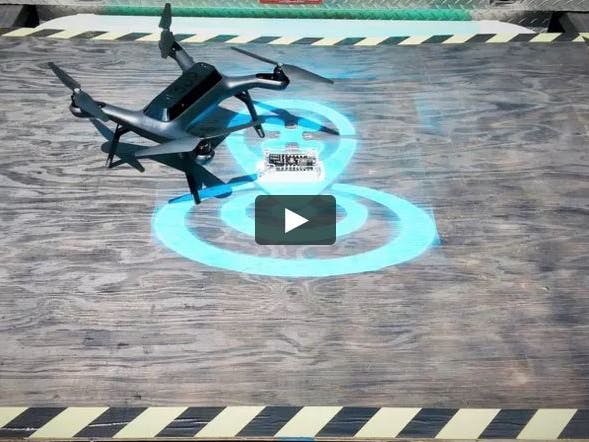 The customized Precision Landing firmware for Solo has been updated. See the links and video immediately below. NOTE: This updated firmware assumes that you have a reliable rangefinder connected (rangefinder instructions are not covered in this article).

***NOTE: in this updated version of the code, the IR-LOCK sensor is connected via I2C bus 1 (see link1 and link2 for more details), rather than bus 2, as described below.

The IR-LOCK Sensor system is used to autonomously land copters in small areas. Simply place the MarkOne Beacon at the desired landing point, and initiate the LAND mode. This is useful for docking with charging stations, package delivery systems, UAV-to-ground vehicle interaction, etc. The MarkOne Beacon can be reliably detected in any lighting condition (even complete darkness).

The original APM:Copter (Ardupilot) documentation can be found here. However, connecting the IR-LOCK Sensor to SOLO requires a bit more work than the typical Pixhawk connection, so this documentation describes the necessary steps.

SOLO includes Pixhawk2, NOT the Pixhawk(1) shown in the image

DATA: The sensor communicates with SOLO via I2C. Unfortunately, I2C pins (SCL/SDA) are not exposed in the SOLO accessory bay. Thus, the sensor should be plugged into the I2C bus that is used by the SOLO battery. The SOLO battery and IR-LOCK Sensor can operate simultaneously on the same I2C bus.

You will need to remove the SOLO battery tray (see steps 4 and 5 in the SOLO Teardown).

The image below shows an example of a plug-and-play cable assembly which connects the 5V and I2C lines.

The IR-LOCK Sensor should be mounted with the lens pointed downward toward the ground. It is important for the sensor to be level with SOLO

NOTE: Before mounting the sensor, you will need to setup your sensor (i.e., upload sensor firmware, and adjust lens). Those instructions are included here.

Upload this modified version of the SOLO firmware (linked below). Instructions for uploading firmware to SOLO can be found here.

The parameters enabling the precision landing feature are hard-coded in this modified firmware. You do not need to make further parameter modifications.

The source code is linked at the bottom of this tutorial. Note that the correct branch is 'irlock01'.

Use the video below to plan your first precision landing flight. Simply fly over the IR Marker, and then initiate an automated landing by pressing-and-holding the FLY button.

If the sensor does not 'see' the IR Marker, then SOLO should land in its current location (as normal).... If SOLO is not responding to the IR Marker during landing, then the system will require troubleshooting. There could be a sensor connection issue.