A simple intrusion detection system based on VoCore

A simple intrusion detection system based on VoCore 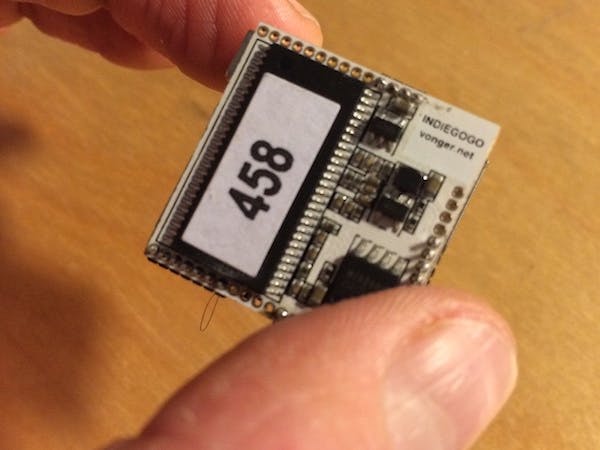 Some days ago I received my VoCore, this device is amazing it’s a full embedded Linux device with  OpenWrt, WiFi and Ethernet on board and many I/O (i2c, GPIO, SPI, UART, ..). Its main strengths are size and WiFi on board.

For a maker a device like this is awesome, combine connectivity and power in a so small size can open infinite possibilities but the first that comes to mind is smart sensors.

Smart sensor is a generic term, my own interpretation is about a device can acquire some physical data, elaborate it and communicate over the internet. What I’d like to present in this post is a simple use of VoCore as smart sensor.

Before starting we need to the configure OS. I chose to use Python for implementing the smart sensor logic.

VoCore is shipped with a release of OpenWrt that doesn’t carry Python, so here are the steps to install it, I skip the basic VoCore setup because it can be found on the VoCore site. Next steps assume you are able to connect via ssh to VoCore and it has an internet connection enabled.

OpenWrt uses a package manager called opkg, like many others it uses a list of repositories urls where to look for packages. These urls are defined in /etc/opkg.conf and in default configuration the repository for python isn’t present.

So first step is to add a new repository url, add the following line to the end of /etc/opkg.conf:

After this we need to update opkg cache with following command:

And finally we are able to install python:

Now it’s time to work on hardware, what I’d like to make is a simple intrusion detection system that sends a push notification when someone gets in the room. To send push notification I’ll use Pushetta, a service I made specifically to solve this task.

A PIR sensor is used to detect movements, this kind of sensor uses infrared radiation to detect temperature changes in a specific range.

PIR sensors are cheap and really simple to interface with a microcontroller, there are only three pins. Two are VCC and GND and the last one is the OUTPUT.

In the following video I show how it works, I’m using a portable oscilloscope connected to the PIR sensor. As you can see, when something moves in the sensor’s range output level goes high (+5V) and returns low after a while.

What we want to do is read PIR output and send a push notification when it changes to high.

To send notification we’ll use a web service I made called Pushetta, this is made of a web site and two Apps (one for iOS and one for Android).

First we need to register on the Pushetta web site, it’s free and it’s a mandatory step to be able to send notifications.

After signup process we need the API key, this is the key used to call Pushetta service and send notification, it’ll be used in code we’ll write after.

Last step is to create a channel. A channel is something like a topic used to send notifications. To receive notifications, users have to subscribe to a channel they're interested in, using Pushetta Apps. More information about how Pushetta works can be found on www.pushetta.com.

Now we are ready for the last step: connect PIR sensor to VoCore and write a few lines of Python code to handle all the logic. In the picture there is the schematic used for our experiment. Connecting the PIR sensor is really simple, I used GPIO0 as input in the VoCore module. With this circuit GPIO0 is put to low when PIR signal is up and vice versa. It must be taken into account that the PIR sensor requires +5V as power source; on VoCore the USB+ pin can be used.

Before writing full Python program it's better to test that everything is working as expected with a simple shell script, first step is to login on VoCore via ssh and change directory to GPIO0 sys filesystem as follows:

If we see an output like the one above we are in the right place and the next step is to change dir to gpio0.

Two files are important for us, and direction is the first one. We need to put the string “in” inside to this to set GPIO0 in input mode (to read from it). The other one is value, value is 0 when GPIO0 is low and 1 when high.

Coming to the script we can use the one below, it simply read value every second.

0 mean PIR is sensing motion, else nothing is moving around it, all works fine!

Now the code, I found an already made wrapper for interacting with GPIO made by Stefan Wendler and to not reinvent the wheel I use this, is called DigitalIO and I put it on github with all the code of this article.

This wrapper makes really simple to read GPIO status, with the following five line of code we can print on console the GPIO status read every half second (something like we made with shell script).

The last piece of code we need is the one used to send the notifications. We make a function to solve this task later used in the final code.

With all the pieces in our hands, it’s time to assemble all together and make real our smart sensor.

It isn’t a “production ready” software but a good starting point to make the real one. A small problem with this code is it send a push notification for every motion it detects. This can generate many notifications and Pushetta protects for this problem blocking requests if these are too frequent. This can be simply addressed recording last notification sent and send another one only when some time has passed, I leave this as an exercise for the reader.

Here is the full code.

2 projects • 11 followers
Coder, Hacker and Maker. Author of Pushetta and many other thinks.
ContactContact