A couple of days ago, I got a gesture recognition sensor. Used it for a couple of days, I am pretty sure that this is a classic work!

A couple of days ago, I got a gesture recognition sensor. Used it for a couple of days, I am pretty sure that this is a classic work! 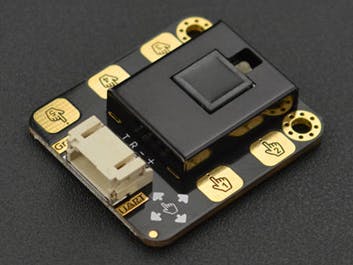 Gesture Recognition, which always comes with sci-fi, cool properties. The gesture recognition technology plays a big role in many sci-Fi blockbusters and works about the future. With the passion to bend my knees to this kind of futuristic technology, while, after testing various gesture recognition sensors, only to find the bony reality. My heart is crushed, how could it be so hard to use? I have tried 3 sensors.

The first problem is inaccurate recognition, even though I shake hands with a standard position, waving ahead, the result would be to the right occasion.

The second problem is too slow, which is deadly. Imagine that you made a light controller with these gesture recognition sensors, and you want to show it off to your guests. The action is finished, oh well…nothing happened, you and him / her looking at each other and at a loss for words for seconds. Finally, it lights up… So, the old gesture recognition sensor cannot satisfy my requirements. Until I meet my angel.

Here I want to talk about what my ideal gesture recognition looks like. How I define it?

First of all, it is a control sensor, so it should be reliable.

For controls, push-buttons are common to see in daily life. For example, the chandelier switch in the living room, when it is pressed, the light will be ON/OFF. The switch can control the light. The same as the gesture recognition sensor should recognize the gestures entirely. If I wave up 10, 000 times, the result of the gesture recognition sensor should be 10, 000 UP, there must be no other result. 10, 000 UPs mean reliable, 9999 UPs but 1 other result mean unreliable.

Secondly, recognition should be fast. In the example of a switch light above, if you draw a gesture but the sensor needs to wait for 3 seconds to recognize it. Its destination must be a garbage can.

When you take massive works to make it, but only to find that it is so hard to use, even compared to the simple light switch on the wall. How could it be? Me, I will be mad. What I wanted it is to make the sensor response as soon as the switch control. Once I press the switch, the signal will transmit to light simultaneously, the whole room lights on.

These 2 points are easy to think, for other obscure features, let’s find them out from other products: Sony Headphone WH-1000XM3.

Take the function Left/Right: Switch songs as an example, I will put my finger keep close to the center of the earmuff, then move right to skip the song; If I want to adjust the volume, I will also keep the finger close to the center first, and move it up. Its interaction is well-designed.

Imagining that Sony headphone WH-1000XM3 uses the gesture recognize sensor, and you want to skip the song by gestures. How to do? I must be confused. Where should you start drawing gestures? And when is it going to end? Yes, this is the point, which is the common problem of almost all gestures recognize sensors in the market. How do people know when and where they start drawing effective gestures? When did the sensor begin to recognize gestures? Where is the point to end making gestures? These sign points are all fuzzy, which means they lack clear and standard control rules.

Back to the SONY headphone, when put the finger to earmuff, which means the start of recognition, when the finger is moving, recognizing, when the finger moves to the end of the earmuff and leaves, suggesting the end of recognition. Then the headphone will respond correctly. The whole process has every sign point time, clear and well-arranged. Just like how we learn driving, the coach will figure out the points to reverse and turn the steering wheel.

The last feature of my ideal gesture recognition is that it definitely must have the corresponding flag point in the operation. The flag point may be a rule, such as put it to the center of the earmuff then move right, or feedback, like wave hand when finding the RED led of sensor lights ON, or push down the screen to enable 3Dtouch when you feel the vibration of the phone. These are all the features that I think the perfect gesture recognition sensor should have.

Gravity: Gesture & Touch Sensor is the cheapest one!

The principle of Gravity: Gesture & Touch Sensor and RGB Color and Gesture Sensor are the same, they both based on an infrared ray. To analyze the reflected IR wave, the parts of the sensor should be exposed to the outside. So that you can use transparent materials like acrylic, PC and others as a crust.

And 3D Gesture Sensor (Mini) is based on electric near field sensing technology. There are more choices and scenarios in shells. It still can work normally even put into 2mm opaque cover.

Gravity: Gesture & Touch Sensor is outstanding for 7 practical gestures. Besides, 3D Gesture Sensor is unique for the gesture clockwise circle, which can be applied to scenarios like light, color and volume adjustments and so on.

Gravity: Gesture & Touch Sensor adopts a 4pin Gravity interface, plug, and play, simple to wire. And it only takes 2 IOs. Other sensors need to wire one by one and takes more IOs than it.

Above is all parameters comparison, and how it feels to use? To make you identify with my emotion of using these gesture recognition sensors, form crumble to surprise and astonish, I would love to begin with oblations.

When you wave normally, there are particularly frequent recognition errors — "NONE".

When I was waving faster, the product sample program crashes directly and cannot recognize any gestures (The gif chart cuts the number of frames, so it just looks like very quickly, but actually only a little faster than the usual wave, so-called faster).

In the process of slow-wave recognition, there are many unrecognizable situations.

It takes 3-4 times before you get timely feedback. What’s more, it outputs two mistouch recognitions.

The slow-wave, come on, just a small case, the recognition result is very reliable.

This is the data printed in the upper and lower gesture serials:

When the hand is within 20cm, pull-up and pull-down will output "up" and "down";

If you pull up more than 20cm, or if the gesture is drawn and your hand retracts, it will show "pull and remove"

Have you shocked by the performance of Gravity: Gesture & Touch Sensor? The Ultra-fast wave, its wave speed has reached my limit, my hands are dead...

The intuitive feeling of using these three gesture recognition sensors is no matter how ordinary the former gesture is, the gesture and touch sensor is something. It can be applied to any scene, whether in the control of the home switch lights, or commercially body-sensing interactive devices.

Gravity: Gesture & Touch Sensor is mostly perfect. Do you still remember the 3 features I mentioned before?

Wave at normal speed, how many times I waved left and right, how many it recognized. The result is quite amazing.

With each smooth gesture, it is almost recognizing the current gesture without any delay, so quickly.

On this basis, in the ultra-fast wave of the experiment, the strength it bursts out can only be described as shock. I waved so fast, but it still kept recognizing it without falling, and the recognition accuracy is still so high. Even now, I still cannot figure out its limit, so amazing!

Unfortunately, Gravity: Gesture & Touch Sensor I do not have the feature like this. But if we can find the flag point from the original data and wield an LED indicator as to the visual feedback, it will be done.

1. With the powerful function, Gravity: Gesture & Touch Sensor need not be limited to gesture recognition. With the ability to recognize the gesture direction, it can be fully used as a hand-speed sensor. Put a display to the breadboard and show the handwaving frequency in the display, your handwaving combat device.

2. From the recognition of waving speed, you can do game interaction. Take the flying bird as an example, waving fast then the bird flies high while waving slow and the bird flies low.

4. If you don't like the palm of your hand, you can also do it with a single finger.

5. If you feel that one-handed operation is not addictive, then put your hands together and turn the sensor at the right angle.

And what kind of interesting production will come out? More possibilities await you to discover.

Thank you for reading!